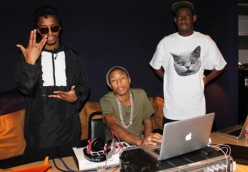 Tyler, the Creator in the studio with Pharrell and Lupe Fiasco

It appears that Odd Future leader Tyler, the Creator has recently been in the studio with super producer Pharrell and lyrical mastermind Lupe Fiasco. The image to the right has been making it's way around the web the last day or so. This combination could shape up quite nicely. We are eagerly awaiting....Read More