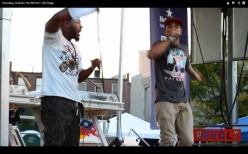 We are very honored, two years in a row!!! Shoutout to all the other nominees and all the other groups in STL, all good people, Tef Poe won the award for Best Male Hip Hop Artist Solo, Theresa Payne won for best RNB artist, Rocky Knuckles was inducted into the Hall Of Fame as well!! http://blogs.riverfronttimes.com/rftmusic/2013/06/2013_rft_music_award_winners.php...Read More