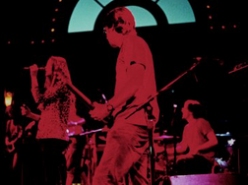 Bardo Pond are an American psychedelic rock band formed in 1991, and who are currently signed to London based label Fire Records. Bardo Pond's sound is characterized as psychedelic but has to be recognized as a category all in its own. Bardo Pond is unlike any band making music today. The sound has a lot of heavy repetitive drone type sound to it and use sounds and instruments uncommon in the typical band. Topped off with synthesizer and female vocals, Bardo Pond has a specific and signature sound. Bardo Pond has a distinct sound and can be recognized from a distance. Bardo Pond's albums range drastically in style and each album is a journey in itself. The current members are Michael Gibbons (guitar), John Gibbons (guitar), Isobel Sollenberger (flute and vocals), Clint Takeda (bass guitar), Jason Kourkonis (drums), and Aaron Igler (synth/electronics). Bardo Pond's drug-inspired music is often classified as space rock, acid rock, post-rock, shoegazing, noise or psychedelic rock. Many Bardo Pond album titles have been derived from the names of esoteric psychedelic substances. Their sound has been likened to Pink Floyd, Spacemen 3 and My Bloody Valentine amongst others.

Allmusic describes Bardo Pond as having "lengthy, deliberate sound explorations filled with all the hallmarks of modern-day space rock: droning guitars, thick distortion, feedback, reverb, and washes of white noise." Bardo Pond are a taper-friendly band who encourage fans to make recordings of their shows

The members of Bardo Pond also operate a number of side projects including: