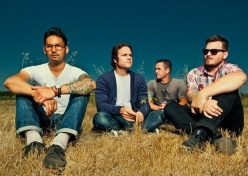 Thrice have graced fans with plans for their final album. The band got together earlier this year and put together "Anthology" which drummer Riley Breckenridge says, is a true representation of their live performance.

"Anthologyis a live record that is truly live. There are no overdubs, no edits and no pitch corrections. We wanted this to be an honest and accurate representation of a show from our Farewell Tour and a memento for our fans, and that's exactly what it is."

The record is due out in October, and will accompany the band's farewell tour, which kicks off later this year. You can grab pre orders over at Thrice's official web store.

affaq
good post like it https://www.flatrockspeedway.com/articles/2012245-arca-cra-super October 23, 2021
Christopher Lynch
If you need a fresh studybay.com review, that's it. I ordered a paper a week ago and was amazed by how skilled and professional the service was. I will surely use it in the future, even for the most complicated assignments https://topessayservices.com/studybay_review/ August 13, 2021