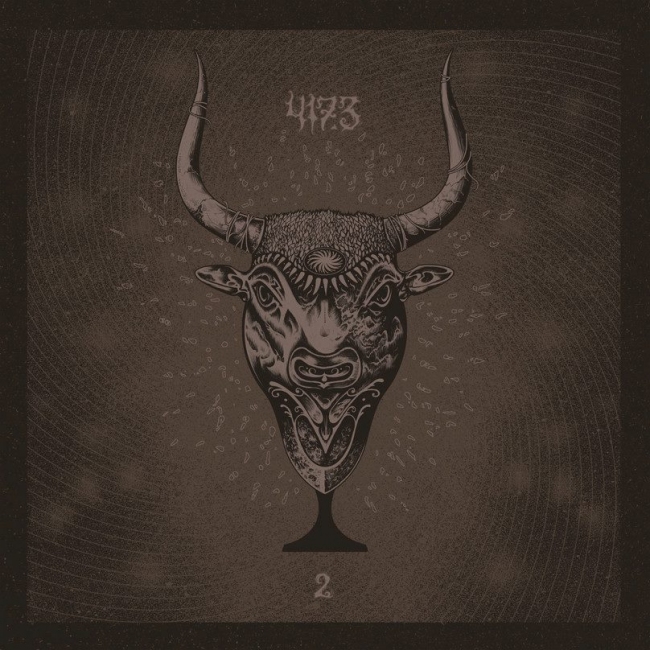 417.3 is an instrumental post-rock/ post-metal band from Russia. I first heard them just recently thanks to facebook. Their album "2", which is their 2nd full length album, came out on December 7, 2012. A link to listen and purchase the album was posted on facebook through a post-rock community page. I was first drawn to 417.3 by their heavier drome/ doom sound and low tunings and low end tones, then was mesmerized and addicted to the sound as it turned a bit softer and more melodic. It is a perfect balance of heavy and melodic which draws the listener to a surreal place away from reality and into the world 417.3 created. 417.3 first album was quite different from the newest album "2" as i was surprised to find. The band previously consisted of many instruments including violin, contrabass, and cello (as you will read more about in the interview). The first album was much more avantegard, if you will, with a lot of well placed off key breaks and genius song writing skills. I enjoy both albums nonetheless. I am truly addicted to the album "2". I absolutely love the long track lengths and how smoothly it switches from one mood to another. I highly recommend purchasing and listening to this album from a one of a kind Russian post-rock band. I have been speaking to 417.3 via email and with great thanks to the band, they agreed to answer an interview I sent them. Thanks for reading and I hope you enjoy their music as much as I do. I give the album a 9/10 easily.

417.3 was formed in Rostov-on-Don, Russia, in the end of 2005 by two friends who earlier had been playing in the other band called Scotopic Vision (post-metal/doom). At that time 417.3 consisted only of a guitarist, violinist and drummer. In the beginning of 2006 a contrabassist joined the band. From 2006 to 2008 the band had been playing with two violins, contrabass, drums and guitar. In 2008 musicians replaced two violins with a cello. In 2010 a second guitarist joined the band (he also played in the band Scotopic Vision). And in 2012 417.3 has completely changed their sound, which now is: two guitars, synths, bass guitar and drums.

The name 417.3 doesn't mean anything. It's just a mixture of digits, as well as the names of the songs.

3. Can you tell us a little about the change of line-up for the new album?

The change of line-up was mostly due to the personal problems of the musicians. That was the main reason. But musical preferences also did their bit.

4. What has the general response for the new album been so far?

We've heard mostly positive opinions on the album 2, but, you know, there are many negative ones. Tastes differ. It's normal situation. We think that negative opinions should exist any way. If in this world people have only one common opinion, the world will collapse

5. Who are some of your musical influences?

We can tell you about our old favorite bands. They are Neurosis, Cult of Luna, Deftones, Exposions in the Sky, Despiced Icon. There are many others of course. We like different styles of music.

6. Are there any plans for an album release tour?

We've never had a tour yet, Mark. Only separate shows. We would be very glad to have it of course. We think it's possible to organize it soon.

7. Your tones are amazing. What are some of your secrets and equipment for your sound?

Thanks) We try to have a natural, "live" sound and use analog and high-quality digital sound effects. Our first guitar has mostly clean sound and sometimes overdrive (it's Ibanez of Artcore series). The second guitar has an ambient sound which is created with the help of many pedals and other sound effects (the guitar is a classic Stratocaster.

8. Is there anything that i didnt touch base on that you want your fans to know?

We want to wish everybody to be oneself, never give up their dreams and go all the way. All the best, friends! From Russia with love

Theodore
Get true experts to do your high school or college papers. The webpage https://www.poluswebsolutions.com/essay-topics-and-ideas-that-work-great-in-college.do are the only online assignment writing service you'll ever need. They offer homework writing services with you in mind. June 26, 2022
MaximilianBryan
I've been looking for this particular interview for as long as I can remember. Thankfully, I got referred here while on https://www.jpost.com/promocontent/best-essay-writing-service-2022-top-5-services-687188. Finally I've had a glimpse of this interview! March 17, 2022
Mark Muehling
thanks man :) December 24, 2012
Ryan Meyers
Dope interview Mark Muehling! December 20, 2012
Ryan Meyers fluxes with it
Mark Muehling
i especially love the response to questions 4 and 8 December 20, 2012