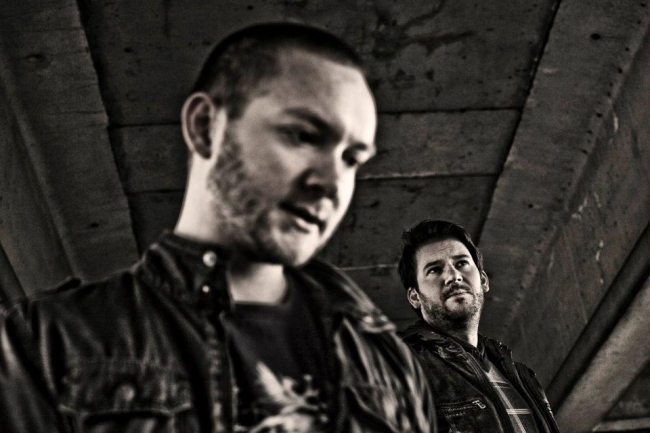 Collapse Under The Empire is an instrumental / post-rock duo from Hamburg / Germany. They formed 2007, when Chris Burda and Martin Grimm got together to develop their own music. Collapse Under The Empire is a 2-piece post-rock band with an electronic feel which makes the band unique, but equally inspiring and other said bands of their genre. Fusing keyboards, synthesizers, guitars, and drums to form a soul searching ambience that speaks volumes to the world through music. The thing I love about intrumental music is that anyone in the world can listen and enjoy it. You dont have to understand a certain language for the song to speak to you, and the music speaks to everyone in their own personal and different way.
Their latest album "Shoulders & Giants" which was released in late 2011 was their 3rd full length album released by the band. The album, and their previous albums, inspire me as a musician and a person in general and gave me the idea to reach out to them for more information about C.U.T.E and learn more about what it takes to become an internationally touring band and just to have the privelege of talking to an amazing band. I sent this interview off and this is the result. I hope their words and music inspire you all as much as they have for me. If you like instrumental post-rock/ ambient sounding music as much as I do, then im sure that you will. Thanks and enjoy.

1. Tell us a little about C.U.T.E and how you formed and when.

Martin:
It was more by chance that we met each other. Both of us had moved to Hamburg because of new jobs, and because of the distance, we had to leave our bands. In order not to be completely “bandless”, we founded Collapse Under The Empire, and from that point on, we’ve been refining our sound.

Chris:
We both played in many different bands before Collapse Under The Empire. Some were rougher, some were softer, but we never really left the path toward rock. We still remember our beginnings well- the hours-long rehearsals in small, dark cellars or the first live performance in front of an audience of three. In any case, it was a great time, the kind of thing every musician should have to go through, a time in which you experiment a lot, learn from things, and above all, rock out.

2. Who are some of your influences musically?

Chris:
Our musical influences come from many different directions. Martin, for example, didn’t listen to any kind of instrumental music before we founded Collapse Under the Empire. I believe that precisely because we used to like different music beforehand, our sound and our method of composition is different from many bands from our genre. In the last few years, many kinds of music have accompanied and excited me, like film music, electronic, rock and alternative, until I finally felt that Post Rock really belonged to me.


3. How has the response been for your latest album "Shoulder's & Giants"?

Martin:
With every new release we’ve brought out up to the present, we’ve had more success than with the previous one. It’s really great to see how our music has spread across the whole world and gotten known. In many areas, we don’t have to do as much work ourselves; news and videos start to spread on their own. I know that at the beginning we had it pretty hard. We had to get in touch with so many people, sent tons of letters to magazines, and worked together with a lot of blogs. All that work appears to have paid off, and we get more and more happy with every release as we get to know more and more people and fans.

4. How has the experience been so far working as a 2 piece, and how does that effect the productivity of the writing and recording process?

Chris:
We don’t see ourselves as a band in a classical sense, rather as a project that is creative without compromise. Everything is allowed….as soon as the basis of a song has been captured, we set the C.U.T.E. - formula on it and go further. Of course that doesn't always work, but I think that with our last album "Shoulders & Giants", we’re building our own niche.


Martin:
From the beginning, creativity came first for us. I meet with Chris 2-3 times a week in my studio, we sit down and create something new. It’s that easy, and that’s also a reason we’ve had so many releases in the past 3 years.


5. I understand that "Shoulders & Giants" is the first album of a two part concept. What do we have to look forward to for the 2nd and final album of the concept?

Martin:
“Sacrifice & Isolation”, the second album of our concept double album, will be much more gloomy. We plan to tell history to its end with our music. In the first part, it’s about how people make themselves strong and fight to search for greatness... Far, far away from any kind of civilization. in the second part, it’s about total isolation, loneliness and all the dangers, all the way up to death.
We would like to translate all of that as well as possible into music. It’s a difficult piece of work, but we think that we’re ready for it.


6. Where are some of your favorite places to play shows? / 7. Is there any chance for a tour to the U.S. anytime in the near future?

Chris:
At the moment, we sadly have no time to tour, because we’re working on the second part of our concept work “Sacrifice & Isolation”. That takes up a lot of our time. We hope, though, that next year we can at least play a couple of concerts.

Martin:
Maybe it sounds funny, but up until now we have not played a single concert. As a duo we’re more of a studio project than a band that plays live shows. For live performance of our songs, we’d also need a few additional musicians. I can really imagine though that in the near future will plan a show that will make people jump out of their seats! I think it will be something new, something that doesn’t yet exist. Because we play purely instrumental music, we have to place the focus on visuals in order to excite the audience. I think that our tour would certainly start in the USA, since we have the most fans there.


8. Is there anything else that I didnt touch on that you would want your fans to know?

Chris:
Yeah, in the last 3 months we’ve been especially creative, and therefore this summer we’ll already be releasing our next full length album called “Fragments of a Prayer”, with 10 tracks.
The new tracks are not as gloomy-sounding as on other albums and are partially more orchestrally oriented. In some tracks, like “The Beyond”, which is accompanied by strings, pianos, horns and woodwinds, we sound more like a film sound track. We would be happy to work more with the film sound track theme in the future, because we’ve long planned to compose a complete sound track. I think that our music would function well as a sound track. So if a film director or music supervisor happens to read this interview, they should totally get in touch with us!
The new album wasn’t really planned since we wanted to work on the second part of our concept album, “Sacrifice & Isolation”, because it’s appearing end of next year. The funny thing is, the new album came out of work on a B-side for our last single, “There’s no Sky”. We quickly realized that the track composed for the B-side was too good, and decided to write 2 or 3 more tracks to make a small digital EP. When we quickly had 2 more tracks, we decided we would release a mini album... and now it’s become a complete album! As soon as you get into the creative process you get into this mood from time to time, and an album can arise relatively quickly. We’re very proud of the album, because in our opinion, it contains some of our best and all-encompassing compositions of recent times.

This song is from their latest album titled "Shoulders & Giants" and the song is named 'The Last Reminder'.

Mark Muehling
yea man this album is really good. iv been addicted to it. glad u like it. im stoked to have gotten a response back from them. all their albums are good but this one is my favorite i think April 1, 2012
Ryan Meyers
Damn, that song is awesome! Great interview, I gotta check out their album! April 1, 2012